A Trek Thru the British Isles XI- Paris, France

The final port of call on our 12 Day British Isles Cruise was Le Havre, France the port near Paris, France. Mom and I had been looking forward to this stop, even though it was our final port of the cruise before returning to Southampton, England for the return flight home. Mom had made a very specific request to me to choose a tour that included a visit to the Louvre Museum and the Eiffel Tower. Lucky for us, there was an excursion that included both!

We left the ship on a sunny, cool morning for the almost 2 hour journey into the city of Paris. Our tour group was in a great mood and our tour guide for the day was a nice woman with a friendly manner about her. The only thing I found disconcerting was that she had an extremely thick French accent that made it hard to understand her "English" as she lectured on French history on the drive to Paris. I had studied French in school, so I fared better listening to her than most of the passengers on our tour. I was just happy to be back in France (we visited the French Riviera on another cruise). After a short rest stop along the way, I could finally see the outskirts of Paris from the tour bus window.

View of Paris from our Tour Bus 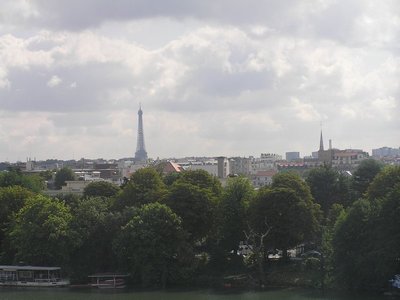 The first stop of the day was the Louvre Museum. It was about 10:00am local time and already there was quite a crowd inside the museum. The Musée du Louvre is one of the world's largest museums and the most visited art museum in the world. It is located on the Right Bank of the Seine river. About 35,000 objects from prehistory to the 19th century are exhibited over an area of 652,300 square feet. The museum is housed in the Palais (Palace) du Louvre which began as a fortress built in the late 12th century under Philip II. The building was extended many times to form the present Louvre Palace. In 1682, Louis XIV chose the Palace of Versailles for his household, leaving the Louvre primarily as a place to display the royal collection, including, from 1692, a collection of antique sculpture. During the French Revolution, the National Assembly decreed that the Louvre should be used as a museum, to display the nation's masterpieces. 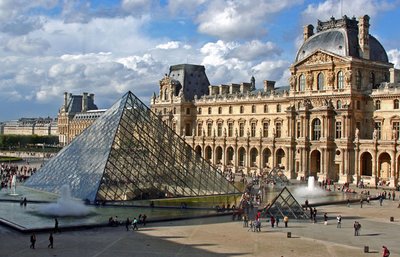 Our tour group headed inside and our tour guide lead us to several galleries to view some specific pieces of art that she wanted us to see. Our time at the museum was short because we were having lunch at the Eiffel Tower, so the guide released us to tour on our own before returning to our tour bus. To say that the Louvre is a massive structure is an understatement. The galleries went on forever and there were lots of stairs too. It was hard to decide what to try to see next and the crowds were growing by the minute. Mom and I decided to make our way to the Mona Lisa gallery, only to find standing room only space at the back of the huge room. We never got to see this famous painting up close because very rude gawkers refused to move away from in front of the painting that was protected by bullet proof glass. It was a major disappointment for Mom because it was the piece of art she most wanted to see. So after taking some distant photos over people's heads, we headed back down to the museum lobby.

A Gallery of art at the Louvre Museum in Paris, France 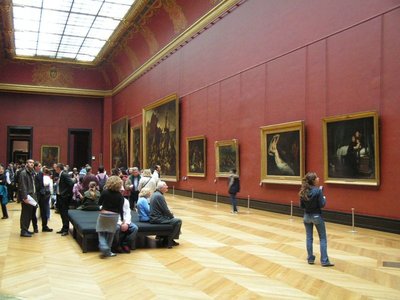 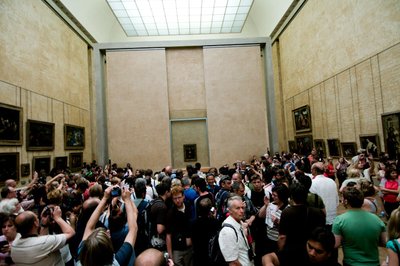 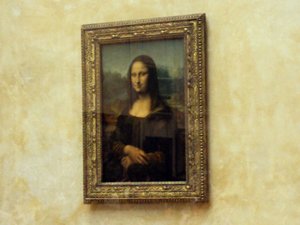 The museum lobby was also crowded, but we managed to find a restroom and a seat near the gift shop to wait for the rest of our group. Mom waited outside the gift shop while I purchased some postcards and a book with photos of famous works of art and the history of the Louvre. At the appointed time, we boarded our tour bus and headed off to the Eiffel Tower for lunch at the restaurant located near the top of the famous Paris landmark.

The Eiffel Tower in the distance 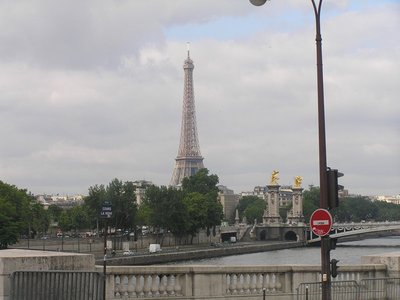 The Eiffel Tower is a beautiful structure. Having only seen the fake one in Las Vegas, the real thing was very impressive. The Eiffel Tower is an iron lattice tower located on the Champ de Mars in Paris. Built in 1889, it has become one of the most recognizable structures in the world. The tower is the tallest building in Paris and the most-visited paid monument in the world. Named after its designer, engineer Gustave Eiffel, the tower was built as the entrance arch to the 1889 World's Fair. The tower has three levels for visitors. Tickets can be purchased to ascend, by stairs or very small elevator, to the first and second levels. The third and highest level is accessible only by elevator. The first and second levels both feature restaurants.

The Eiffel Tower in Paris 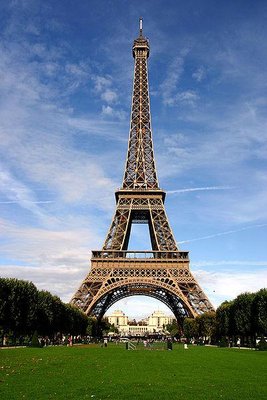 Exiting our tour bus on the plaza under the tower, we were greeted with more crowds. It was still a beautiful and now very warm day. Our tour guide lead us to the ticket booth for the tower and we were taken in small groups up to one of the restaurants for lunch. We were very hungry by the time we were seated. Thankfully we were waited on a served a delicious meal with wine after a short wait. Our group talked to each other and looked at the gorgeous scenery out of the wall of windows. It was a wonderful way to relax. Before leaving the tower, I took some photos of the awesome view.

View from a table at the Eiffel Tower restaurant in Paris, France 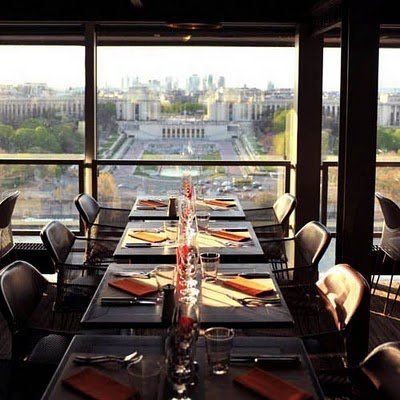 Paris from the Eiffel Tower Restaurant 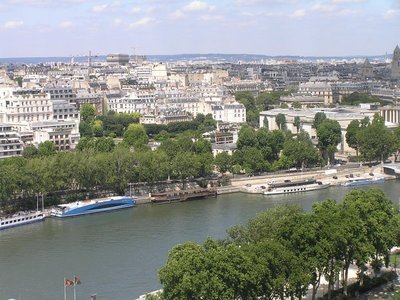 The River Seine from the Eiffel Tower Restaurant 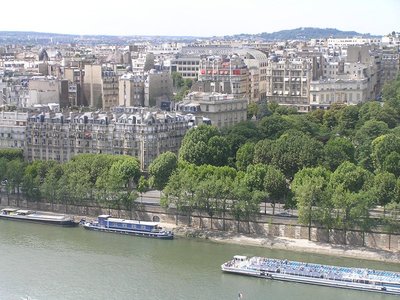 It took a while for all of us to reach the ground floor of the Eiffel Tower after lunch with the crowds and the small elevators. I found a seat for Mom after we finally reached the ground and walked over to a small gift shop for some souvenirs. Our tour bus rolled up and we were once again off to complete our tour of Paris. We drove through the streets and neighborhoods while our tour guide described the views. Then it was back down the highway to Le Harve to board the Crown Princess for sail away. It had been much too short a visit. I made a promise to myself to do a land tour in the future that definitely included another visit to the Louvre (at a much less crowded time of year) and some French wine tastings.

The day after our visit to France we were back in Southampton. We disembarked the ship midmorning and got transportation to Heathrow airport for the flight home. It was another warm sunny day, and I felt so blessed to have enjoyed such a amazing trip with my Mom. It was an adventure that I will remember forever. Now, it's on to the next travel destination on my very long list. I hope you have a travel list of your own!

"Lunch at the Eiffel Tower."

It was just awesome! I could hardly believe I was there eating lunch myself!