A Trek Thru the British Isles IX- Loch Ness, Scotland

We arrived at the port of Invergordon and Inverness, Scotland after a relaxing and much needed day of rest at sea on the Crown Princess cruise ship. Inverness is known as the capital of the Highlands and is the primary city and shopping centre of the area. It has a great location on the River Ness at the northern end of the Great Glen. In summer it is packed with visitors intent on monster hunting at nearby Loch Ness, but it is also an interesting place to visit.

I left the Crown Princess alone early to board a tour bus for the 1 hour trip to Urquhart Castle and Loch Ness. Mom decided to spend the day on the ship after nonstop touring of back to back ports on our 12 day British Isles Cruise. Our tour guide for the day looked like something right out of a movie, dressed in a kilt with long hair and a scruffy beard. I knew right away this was going to be a fun day! 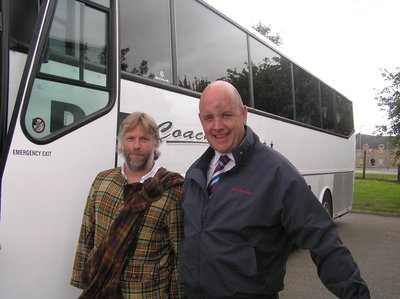 We left the port and headed out into the lush Scottish Highlands and the outskirts of the city of Inverness. It was an overcast and somewhat windy day but the scenery was still beautiful. During the drive our tour guide Ian told us about the history of the area and I enjoyed listening to his thick Scottish accent. Ian had a wicked sense of humor and had us laughing all day long. Robert the Bruce of Bravehart fame was a particular topic of interest to Ian. Having never seen the movie, I listened with rapt attention to the story of this Scottish King.

King Robert I, known as Robert the Bruce, was King of Scots from March 25, 1306, until his death in 1329. He became one of Scotland's greatest kings, as well as one of the most famous warriors of his generation, eventually leading Scotland during the Wars of Scottish Independence against the Kingdom of England. He claimed the Scottish throne as a fourth great-grandson of David I of Scotland, and saw the recognition of Scotland as an independent nation during his reign. Today in Scotland, Bruce is remembered as a national hero. His body is buried in Dunfermline Abbey, while his heart is buried in Melrose Abbey. His embalmed heart was to be taken on crusade by his lieutenant and friend Sir James Douglas to the Holy Land, but only reached Moorish Granada, where it acted as a talisman for the Scottish contingent at the Battle of Teba. Mel Gibson ignited new interest in Robert the Bruce when he portrayed him in the movie Bravehart several years ago. According to Ian, the movie was not entirely accurate, but it did show King Robert as the heroic man that he was. 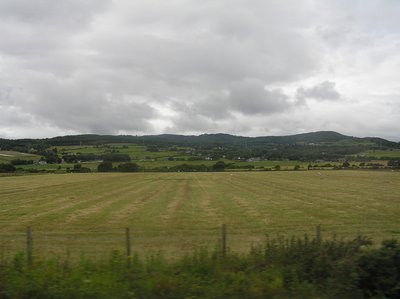 Village in the Scottish Highlands 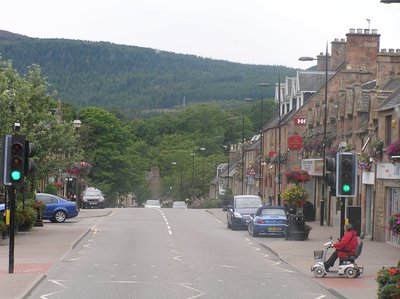 Before too long we arrived at Urquhart Castle and Loch (Lake) Ness. The ruins of Urquhart Castle, once one of largest strongholds of medieval Scotland, is an impressive structure overlooking Loch Ness. It's also the home of the legendary "Nessie" sea monster. In 1933, an enterprising editor in Inverness enlivened a slow news week with the story of an odd sighting in Loch Ness. The legend of the Loch Ness Monster grew overnight. Legend says that the Loch Ness Monster inhabits a cave beneath the ruins of Urquhart Castle. The site of the castle was already overrun with tourists when we got there. There was a very nice visitors center and gift shop in front of the castle where I found store employees giving out samples of Scottish whisky, coffee and other highland goodies. After tasting a few samples, I took some photos and video of the grounds before heading down a steep hill to the ruins and the shores of Loch Ness.

Links to my 2 Videos from Loch Ness are here at my Travels With Gerri You Tube video channel:

Video of the Castle at Loch Ness Scotland

I walked over to the castle and took some photos before a nice man offered to take my picture for me.

Me at the Castle and Loch Ness, Scotland 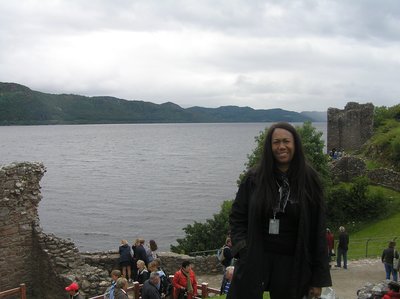 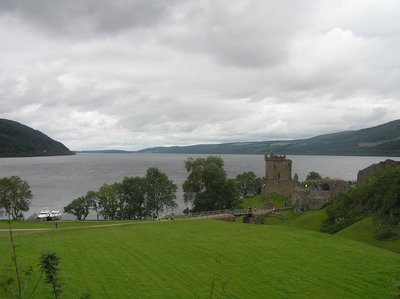 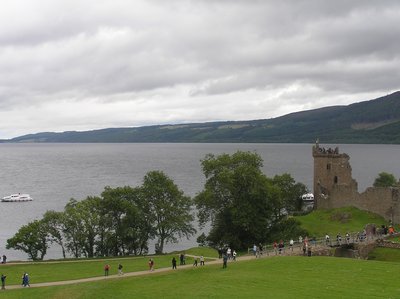 From the shores of Loch Ness I walked back up to the Visitors Center to shop for souvenirs. I bought some Scottish Whisky and some post cards. I was tempted to buy a stuffed Nessie toy but refrained; I had enough stuff to pack to take home as it was. The drive back to port took us through downtown Inverness. There were throngs of people on the streets shopping and sightseeing. Inverness is a very attractive place. 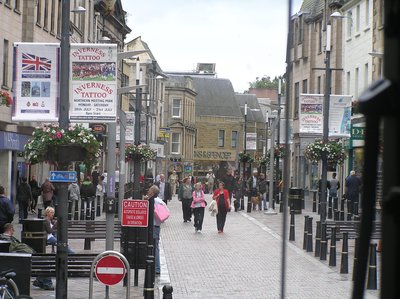 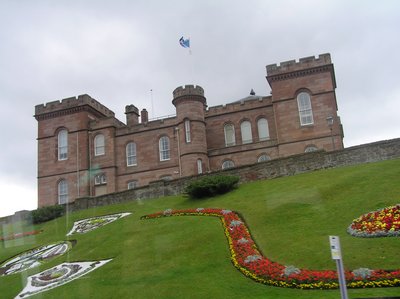 A busy street in Inverness, Scotland 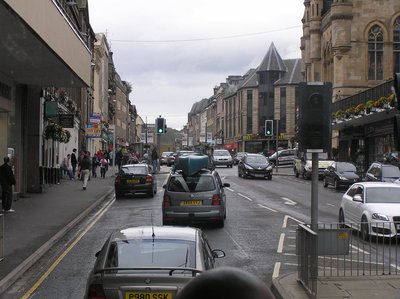 Back at the dock I joined a long line of passengers waiting to board the Crown Princess after a long day in port. As we waited, a lone bagpipe player played for us to keep us entertained. It was just one more thing I loved about Scotland, the people really let you know how much they appreciate your visit to their part of the world.

Here is a video clip of our Bag Pipe send off:

Video of Bagpipe Player at Crown Princess dock in Scotland

And here is a Photo of our Bag Pipe Player send off from Invergordon, Scotland 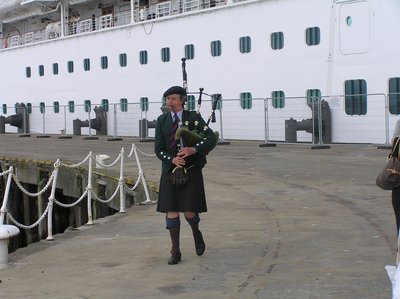 I found Mom relaxing in our cabin and I filled her in on all the day’s events as I unloaded all of my stuff that I carried or purchased during the tour. Sailaway that evening gave us another lovely view of the coast of Scotland. Tomorrow we would dock in Edinburgh (South Queensferry), Scotland. I was looking forward to visiting the famous and historic sites of this well know city!