A Trek Thru the British Isles IV- Dublin, Ireland

A Visit to the capitol of the Republic of Ireland

The next port of call on our British Isles cruise was Dublin, Ireland, the capital of the Republic of Ireland. We docked on a misty, cloudy morning not too far from the city center. Mom and I headed up to breakfast early because we had an all day city tour scheduled to begin around mid morning. After breakfast I went up on the top deck of the Crown Princess to take some photos and video. 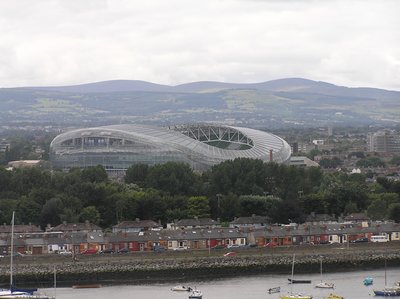 View of Downtown Dublin from the deck of the Crown Princess 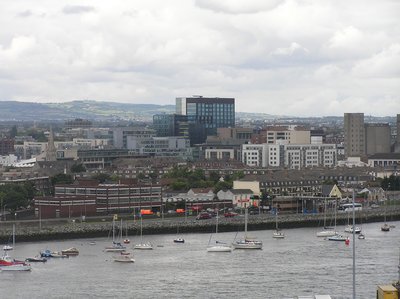 Video of the Port of Dublin, Ireland

Dublin and the Republic of Ireland has a fascinating history. There is evidence of the existence of Dublin that dates back to the second century. Norman Vikings were the first settlers of the city. Dublin was later captured in the 9th century by the Danes. The Irish wrested control of Dublin from the Danes on a number of occasions during the next three centuries, until 1171 when the Danes were expelled by the Anglo-Normans, led by Henry II, king of England. Until the middle of the 17th century, Dublin remained a small, walled medieval town until 1649, after the English Civil Wars when the town was taken over by Oliver Cromwell. By the end of the 17th century a period of growth began when Protestant refugees from the European continent began pouring into Dublin. During the next century, Dublin grew size and wealth and became the second city of the British Empire. This growth made Dublin an exciting city for the Protestant members of the Anglo-Irish aristocracy, a group who had routinely denied basic civil rights to the native population of Roman Catholics.

Ireland became independent in 1922 after the 1916 Rebellion and the subsequent War of Independence. After Independence, Dublin became the political, economic, and cultural center of Ireland. Maritime trade is one of Dublin's most important activities and Dublin is Ireland's largest port and major exporter. It has also developed into the largest manufacturing city in Ireland. The city's most famous business is the Guinness Brewery, founded in 1759 and one of Ireland's largest employers and exporters.

Our city tour of Dublin began with a drive down the busy city streets. I was amazed by the beautiful buildings and all of the bridges along the way. One particular bridge caught my attention because it looked like a huge sail boat in the middle of downtown. Apparently this bridge is not a favorite of Dubliners because our guide, a wonderful, knowledgeable and extremely funny lady, made fun of the bridge as we were passing by. I thought it was great! 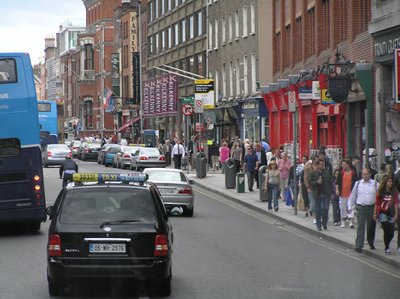 A unique looking bridge in Dublin 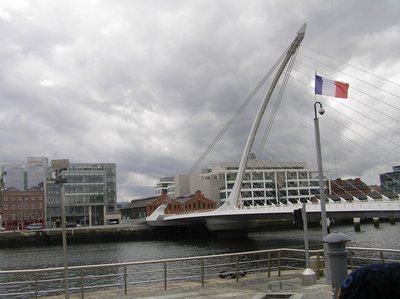 Looking out of the window of our tour bus I noticed a series of bronze statues of emaciated looking people erected along the sidewalk. Our guide informed us that the statues were a memorial to the victims of the Irish Potato Famine. It was one of the most moving memorials that I have ever seen.
Located on Custom House Quay, it consists of sculptures of starving people walking towards the ships on the docks to leave Ireland for other countries, mostly the United States, in hope for a better life. Ireland was struck with a great famine between 1845-49 when it was hit with potato blight, that destroyed most of the potato crop in the country. One million people died of starvation or disease caused from lack of food. I had never seen anything like it and I remember it clearly even today, months after seeing it. 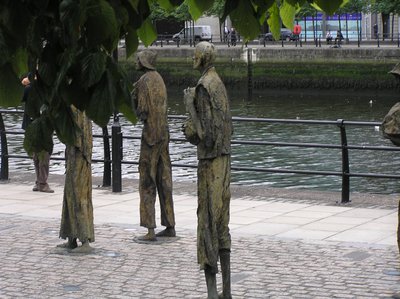 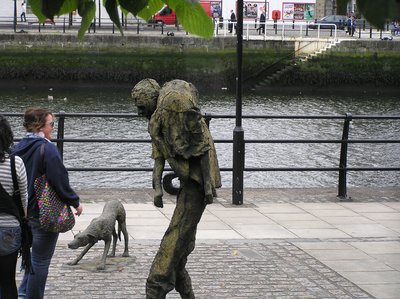 The first stop on our tour was Trinity College. Trinity College, formally known as the College of the Holy and Undivided Trinity of Queen Elizabeth, was founded in 1592 and is Ireland's oldest university. I found it very interesting that Trinity was set up in part to consolidate the rule of the Tudor monarchy in Ireland, and it was seen as the university of the Protestant Ascendancy for much of its history. Although some Roman Catholics had been permitted to enter as early as 1793, restrictions on their membership of the college remained until 1873 and the Catholic Church in Ireland forbade its adherents from attending the college without permission until 1970. Women were first admitted to the college as full members in 1904.

Our guide spent a great bit of time telling us about the discrimination against Catholics and women in Trinity College's early days.

Trinity College, or University of Dublin, has graduated authors Jonathan Swift, Oliver Goldsmith, and Oscar Wilde. Its library houses the 8th-century 'Book of Kells', the famous decorated gospel book made by Celtic Monks.

Our tour guide in Dublin leads us around Trinity College 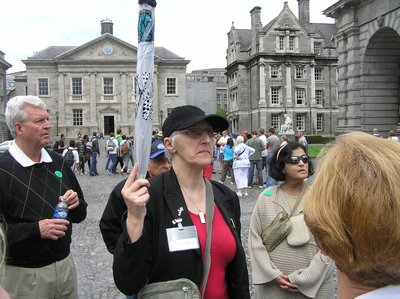 I saw lots of unusual art scattered around the college grounds 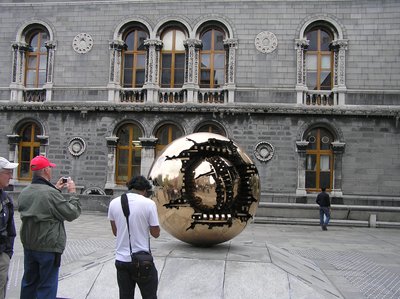 Trinity College Library, location of The Book of Kells 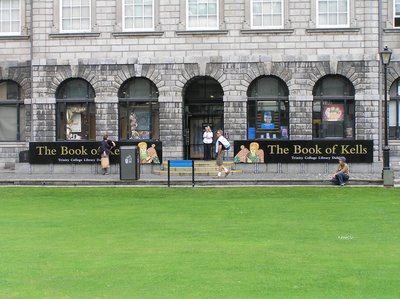 The last stop on our Dublin Tour was Saint Patrick's Cathedral. Saint Patrick's is the National Cathedral of the Church of Ireland, a member church of the Anglican Communion. Saint Patrick is said to have passed through Dublin on his journey through Ireland where he is said to have baptized converts from paganism to Christianity in a well close to where the Cathedral now stands. To commemorate his visit a small wooden church was built on the site, one of the four Celtic parish churches in Dublin. Saint Patrick's is the only remaining cathedral church in Ireland with a daily pattern of sung services. In addition to these services the Cathedral hosts many national religious commemorations. The Cathedral attracts some 300,000 visitors each year. I was to see many churches and cathedrals on this journey, but I can honestly say that St. Patrick’s was one of the most memorable. 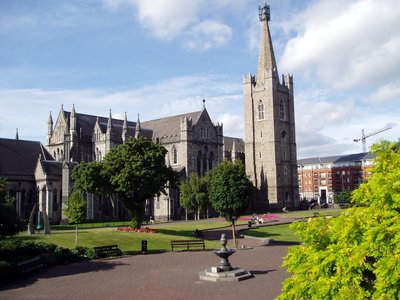 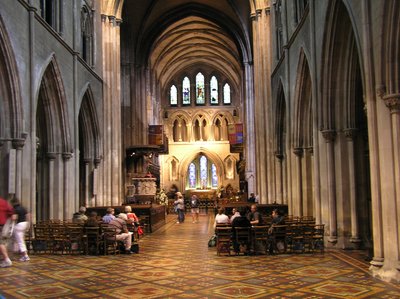 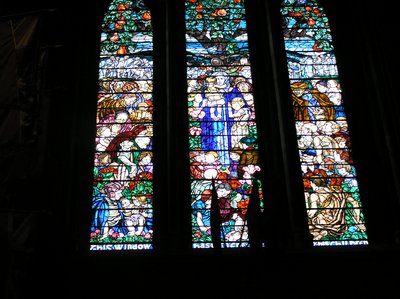 Arriving back at the Crown Princess after our tour of Dublin, I wanted to pinch myself to make sure I was not dreaming. Alabama, USA is a long way from Ireland, but I was there and was loving every minute of it. What made it all the more awesome was that there was so much more to come on our British Isles cruise!

Next up I visit Liverpool, England, the home of the the Beatles and I take ride down Penny Lane!

One of my favorite things to do when I visit somewhere new is to visit the churches in the area. I just love the way they are built and the stained glass etc. love the pictures you included.

Yes Tanja, I so agree with you! I loved visting all of the cathedrals that I saw on this trip. In my next post on Liverpool I will post photos of the AMAZING Liverpool Cathedral. It is really stunning!

I wanted to thank you for this great read!! I definitely enjoying every little bit of it I have you bookmarked to check out new stuff you post.
<a href="http://www.tours-in-israel.com/">Tours in Israel</a>

Thanks so much vijendroy! I'm so happy you enjoyed it!